The history of music therapy begins at the dawn of civilization at the time of ancient Greece with the theories of Plato and the first medical center in Epidaurus where the whole idea first came together to bring art, music and all forms of healing into the same ceremony.

Empirical music therapy began after The Second World War in America with severely traumatized soldiers suffering from what we now call PTSD today. Doctors found that music helped the soldiers, so began training programs, which spread worldwide coming to Europe in the 1950’s and the Nordic region between the 1970-80’s. 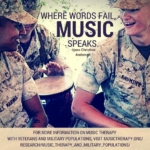 Music therapy can be found in psychiatric and somatic hospitals as well as centers of rehabilitation and palliative care.

In Denmark, music therapy is strongest within the psychiatric hospitals and just now entering somatic hospitals. Music Medicine is entering the ambulances via technology; a program called Music Star.

The Nordic Countries are strongest in Music Therapy as a system theory that focuses on the relationship between patient, therapist and music.

Lars Ole Bonde AAU Report on 8th ECIM 2015 Global Summit Conference. For the first time in the history of the European Congress of Integrative Medicine (ECIM) there was a special conference track on Music Therapy and Music Medicine

About the Author: NIM